In a memory from years ago lives a girl in braided pigtails and mix – matched shoes who learned early “different” was meant to be an insult. It only took years of pointed laughter and averted glances for the insult to become armor. Dressing in vibrancy, a little to clumsy for grace and much to quiet for rebellion, the pigtails were replaced with hair dye, the shoes with tattoos.

The same girl learning how to be a woman wrapped different around her shoulders like a cape and strode into a life she wasn’t quite sure how to live. Finding comfort between pages and on a television screen, different was often replaced with anti social and guarded. Words that were meant to hurt had stopped hitting their mark at the middle school lockers, because it’s hard to harm someone who uses different as a weapon.

With a sword at her side, doing what she loved had always seemed so much easier than following the rules. I don’t know where exactly that brave woman got lost. Unlike a movie, it happened so slowly, it was impossible to catch. One morning, the woman who had never once second guessed her seemingly crazy decisions, looked in the mirror and didn’t recognize the girl staring back.

Her sword was broken, cape torn and dirty, and for a moment, a woman who fought depression twice and won, wasn’t sure tomorrow was worth living. I can’t tell you when exactly the sword was fixed. There was not a finalized moment when she stood and remembered who she was. Maybe it was her favorite TV show or maybe it was her family or maybe it was just her – finally realizing that just like different, broken was never an insult.

Still not completely whole and not entirely sure how to walk when she can barely crawl, I can’t tell you when all of her pieces will fit together again. But that girl with pigtails in her hair and different in her genes will return and she she does, shield your eyes.

My boyfriend Blaine and I have been dating for four years as of yesterday, July 9th. In past years we have been on a much smaller budget, so dinner and movies was usually how we would celebrate. While this served it’s purpose and was enjoyable, this year we decided to spend a bit more and take a day trip to Block Island, RI. From people I talked to and blogs I read beforehand, I wasn’t really sure what it expect. All that I could really gather was this one consensus – it’s expensive.

Gathering this to be true – but also worth it – please continue on to read the events of our day, start to finish.

When Blaine and I arrived to the docks for our 11:50 departing ferry, it became obvious today may not go as planned. We drove around the Water Street parking garage in New London CT, finally finding an open space on the third level. The elevator broken, we ran down three flights of stairs and across the street, finally finding the ticket booth at 11:45 after five minutes of raised voices and arguing over whether we’d even make our ferry in time.

At 11:50 almost precisely, we boarded the ferry and found window seats near the far end of the boat. After turning around once to pick up a group that had missed the departure (so much for our worries), we were finally underway.

The hour and twenty minute ride was beautiful. I have always been in love with the ocean, so I was in heaven. We made sure to check out the very top, open level, which was gorgeous and boasted great views, but very windy, so we spent most of our time on the outside deck of the second level. Around us was open ocean, other sailing vessels, and the occasional bit of land rising from the water. 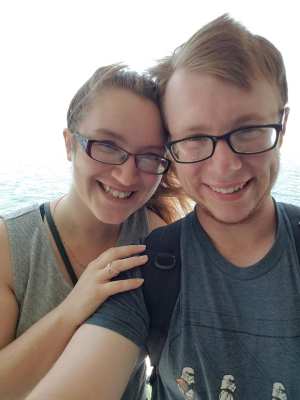 As the ferry approached the island, we rode along one whole side, lined with beaches dotted with people, dirt hillsides, and stretching acres of green grass. My first impression before stepping off of the ferry was that this island was very alive. This was only confirmed when we got off.

Upon exiting the ferry, we were standing in a parking lot facing very colonial style buildings and streets lined with bicyclists,  mopeds, pedestrians, taxis, and mostly out of state license plate cars.

After stopping at the welcome center for a map of the island, we continued up Water Street in Old Harbor, in search of lunch. Hungry and not too interested in searching too long for food, we stopped in at a restaurant called The Surf, located inside the Block Island Beach House Hotel, on Dodge Street. This was a wonderful decision, though a quick one. Our outdoor table was right by the railing and looked directly out to the open ocean. Blaine ordering a burger and I fish tacos, we enjoyed a wonderful lunch, pricey for a young couple, but very worth it. 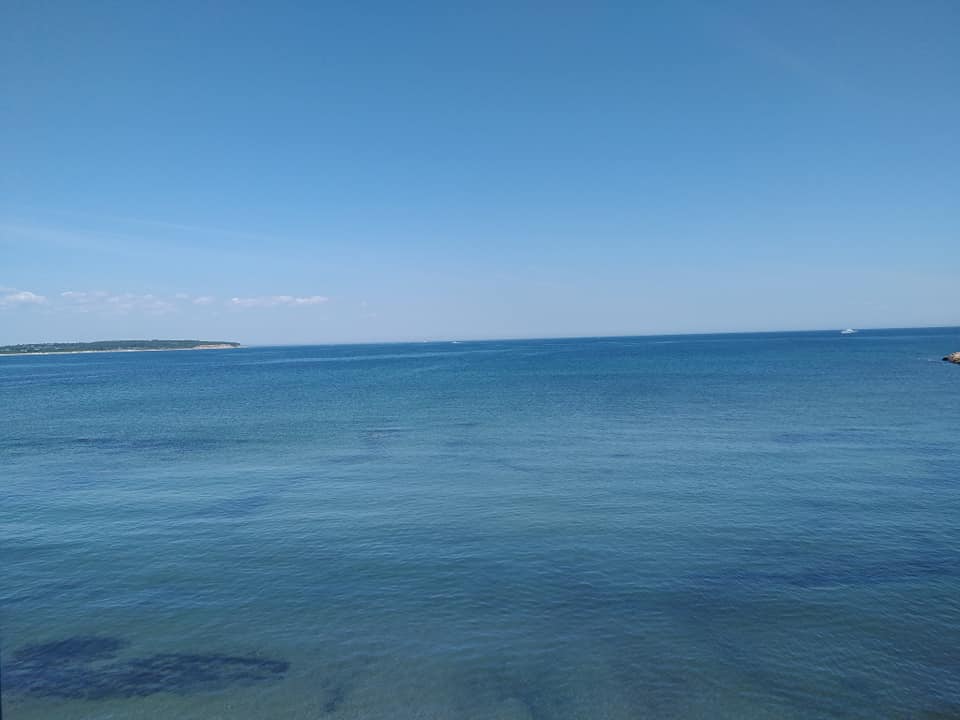 Fully and ready to explore, we began down Water Street, stopping in at the many touristy shops lining the street. One thing new to me was how free everyone was. People were dressed completely in bathing suits or swim trunks, in and out of stores. Others walked in the streets and crossed without concern. Music played from docked boats and shops alike.

After some consideration, and having not decided if we were leaving on the 4:50 or 8:10 ferry, we decided we would at least see the Southeast lighthouse and Mohegan Bluffs. This is where there was a slight wrench thrown in our day. Seeing the trek was only 1.6 miles, we decided to walk.

All uphill and very hot, both dressed in flip flops, we made it to the lighthouse, and decided to call for a taxi to bring us back to Old Harbor, quitting on the idea of Mohegan Bluffs, praying our 9 dollars cash would be enough, and both pretty discouraged and ready to leave at 4:50.

Calling from a list in a free brochure I had picked up, of course the first we called was no longer in service. However, the lady who picked up said she would called a friend who was and call us back. We sat on the grass at the lighthouse for twenty minutes. She never called back.

Now pretty angry, and regrettably not really able to enjoy the scenery at the lighthouse in our current mindsets, we decided to begin the walk back to Old Harbor.

When we waved down a taxi about ten minutes down the road, our spirits immediately began to lift. The young man began making conversation, and upon learning we were from Vermont, told us he had met people from all over, but had never met a person from Vermont he did not like. Towards the end of the roughly 1.5 mile ride we worriedly asked how much the fare would be. He told us 12 dollars. We only have 9, but offered to run to an ATM and get the rest as soon as he dropped us off. He shook his head, saying he could tell we were good people and 9 dollars was just fine.

Moods lifted and a new pep in our step, we stopped at an ATM and took out some cash, bought 8:10 ferry tickets, then caught a new taxi to Mohegan Bluffs. It was well worth the anxiety and stress of the first half of the day. Breathtaking views, cool and refreshing ocean water, and a kind woman in a sparkly dress agreeing to take our photo. We spend a while there, just walking along the beach and sitting at the overlook, taking in the beauty in awe. Our initial trek had limited our time and therefore the amount of things we could see, but if I had come and only seen Mohegan Bluffs, I would have been satisfied.

Using the card our second taxi driver had given us, we called him back for a return ride into Old Harbor. Down a couple side streets we went into stores we had missed, I found a shirt, the only touristy item I had wanted to take back with me. With an hour and a half before our ferry, it was time to find dinner and use the remaining time to explore.

We found dinner at Harbor Grill, fish and chips for me, a chicken sandwich with fries for Blaine. We both treated ourselves to an adult refreshment, paid, and then spent the last half an hour walking along the rocks that jut out into the ocean, and along the beach.

The ferry ride back boasted an amazing sunset over the water, and the cost of the parking garage was substantially lower than I had calculated.

All around, we only saw pieces of the island, but it was an amazing experience anyway. The island was beautiful, the atmosphere unique to which I had only experienced the likes of in Hawaii, and the vibes magical. My only regret on completion of the day was having to step off the ferry and return home.